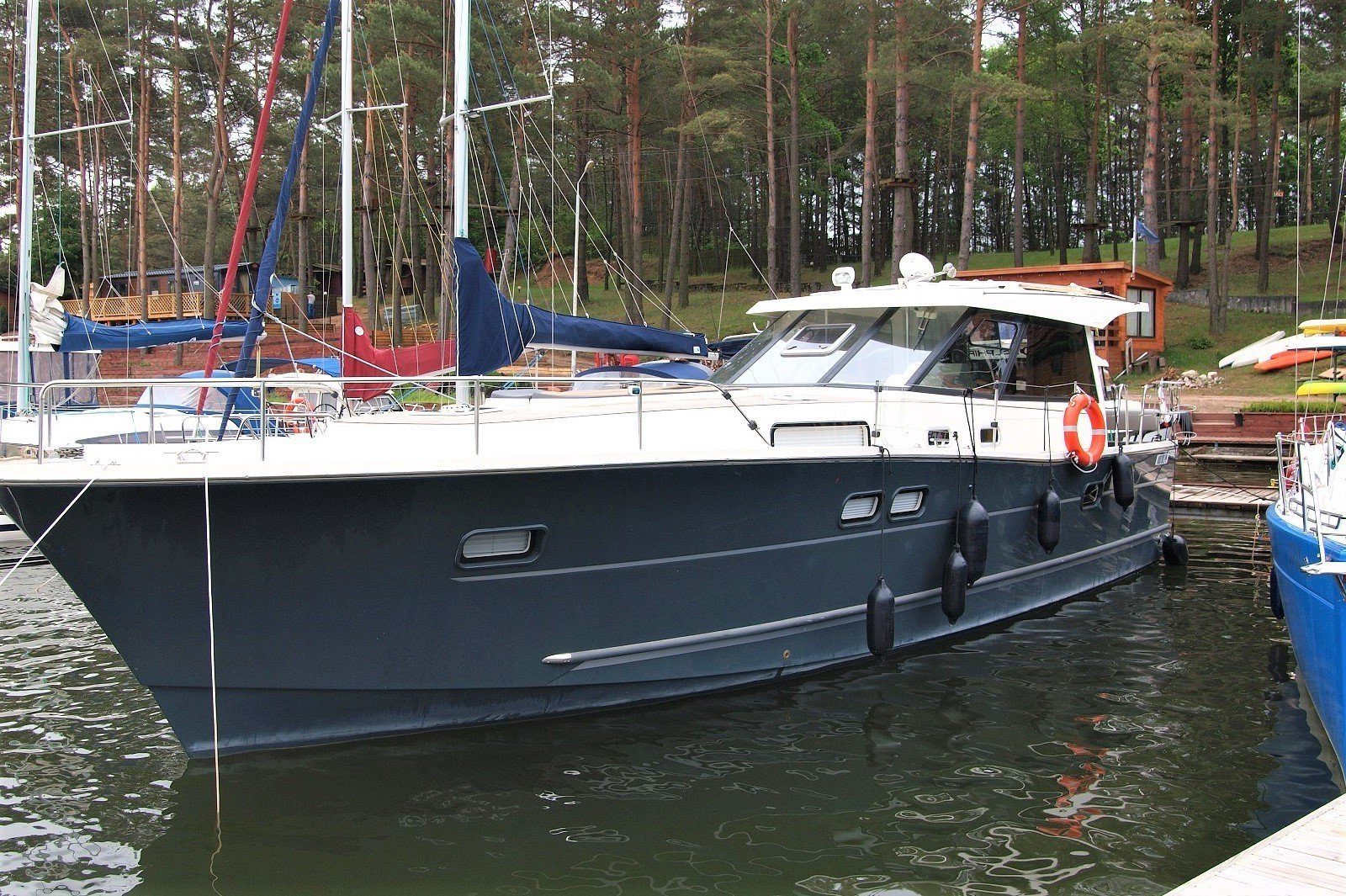 Project of motor boat which uses displacement hull has a simple idea: build a stable motor yacht with a big space for recreational reason on inland waters. Speed in this case is useless.

Looking at the different forms of transport, trains are the most efficient on land, then tires and finally cars. A single train can transport a thousand tons of vegetables from Warsaw to Berlin, much cheaper than a thousand cars, The same thing happens on water. The displacement hull, although slower, can consume one third of the fuel over a given distance of what would consume a comparable-sized planing hull boat (typical cabin cruiser boat).

The reason for the high efficiency of the displacement hull is that it does not use any power when entering the water surface. It doesn’t even try. Instead, it moves very easily on the water. The shape of the bottom of the hull is such that it does not generate any significant lift, but rather minimizes the resistance to waving as it moves through the water.

The longer the hull is underwater, the faster the motorboat can go. From here the displacement hull can only move as fast as an open sea wave of the same length before it starts to climb and overtake the wave. That’s what a planing hull does when it climbs to the plane, above and next to its own bow wave.

If the hull is very narrow and light, it can sail faster thanks to the so-called slenderness ratio. For example, a displacement catamaran with two lean hulls can move much faster than a single hull boat of the same length. However, without excessive power and waste of fuel, the vast majority of displacement houseboats are designed at a ratio of 1.34 (speed to hull length).

The compromise in the displacement hull construction is that a certain slackness in the bilges is necessary to reduce waving resistance. In addition, the thin ends of the hull (bow and aft) reduce resistance, while boat instability increases. There must be sufficient buoyancy at the ends of the hull to ensure longitudinal stability.

To compensate for the reinforced sway of the displacement hull, most of these motor yachts have one or more ways to reduce heeling. One is to add mechanical stabilizers – they look and act like a rudder – to the bilge, rotating automatically to create a force opposite to the rolling movement. Another is the addition of screens, which are suspended from the booms and also create an opposite force to the rolling force. Buoyancy boats can also have fixed keels that increase rolling resistance under water, and the designer can also add lead ballast in the hull to increase stability.

Displacement hull of our motor yachts

Mentioned prices are EXW net EUR – do not include VAT, transport costs to the customer and other costs that may occur.
All data and information provided on this website is for informational purposes only and does not constitute a binding offer.

We are member of: